Anger is one of the most discouraging problems for parents. It creates fear, guilt, and even hopelessness. If it’s your struggle, confronting the lies you believe about anger is the first step in overcoming a problem with anger. Want to listen to this article on a podcast? LISTEN HERE Or WATCH ON YOUTUBE

I’ll begin with a bonus lie: psychologists don’t struggle with parental anger. Not true. It was one of my biggest battles early on in my homeschooling. Unfortunately, I’m not one of those moms who can claim she no longer gets angry at her kids. But I can say that the improvement has been significant. I have yelled, been overly harsh, and even split my knuckle open after I smacked the counter in anger. I have said things I wish I could take back, made my kids cry, and have felt like an all-around awful parent as a result of my anger.

Right now I hope you aren’t regretting that you’re going to be getting advice from me on this issue! I do believe that every mistake I’ve made helps me to help you. I hope you agree. If you do, let’s get started.

First, anger is a normal human emotion. The feeling itself isn’t a sin, but the way we express it often is. Anger always begins in the mind with our thoughts. If our thoughts aren’t true and we act on them, anger will be a besetting sin — one that exercises power over us. So let’s examine what I think are the most common lies we believe and act on.

You probably recognize this one from your kids. “He made me mad, so I hit him.” You might have responded with, “We don’t hit, even if we’re angry.” But we have to address the lie, too. No one can make us angry. No matter how horrible junior behaves. No matter how awful the treatment, how big the disappointment, how outrageous the behavior.

No one, not even Satan, can make us angry. The only person who can bring about your sinful anger is you. Why? Because you’re the one who interprets what someone else does. Two days after my first baby was born, my mother-in-law told me I looked like I had another one in there. I did not get angry — even with the emotion of anger. I could have told myself that she was joking. I could have told myself that I did in fact look like I had another one in there. Both thoughts would have helped keep me from getting angry. I could have had thoughts that provoked me to anger, however. “She is trying to humiliate me,” for example. What I actually thought was, “She has Alzheimer’s. She doesn’t remember that it isn’t appropriate to say that. She loves me. I love her.”

People don’t make us angry. Our thoughts do.

This lie is related to the first. Other people provoke me and I can’t help it. I relate so much to what Terri Maxwell said about this. She noted that she could be yelling at the kids one minute and sweetly answering the phone the next. If we couldn’t control our anger, we would be yelling at everyone — our friends, slow cart pushers at the grocery store, and even our pastor. But we don’t. We save our sinful expressions of anger for the people we love most.

Why is that? Because the people we love most tap into our greatest fears and frustrate our deepest desires. We don’t trust people outside of our home to forgive us our angry fits, but we do trust that we’ll be forgiven by our spouse and kids. Just because that’s usually true doesn’t mean we should continue to sin against our family with our anger.

The lie that we can’t control our anger stems from the lie that we can’t control our thoughts. Perhaps like anger, an initial thought cannot be controlled. With my mother-in-law I might have had an initial thought that she embarrassed me. But I wouldn’t have to hold on to that thought and add to it. The biggest lie in thinking that leads us to anger is that we know what someone else is thinking. My child is trying to make me miserable. He doesn’t care. They think I’m a slave. We do not know what our kids are thinking. Our kids don’t even know what they’re thinking. It’s pointless to ask why a child did something wrong because they honestly don’t know. Do you know why you do things you know you shouldn’t do?

2 Corinthians 10:5 says, “We take captive every thought to make it obedient to Christ.” Obviously, we can control our thoughts. Colossians 3:8 reads, “But now you must also rid yourselves of all such things as these: anger, rage, malice, slander, and filthy language from your lips.” Obviously, we can control our anger, too. Jesus is our example who gives us the power to control our anger. The New Living Translation of Isaiah 53:7 reads, “He was oppressed and treated harshly, yet he never said a word.”

#3 I have righteous anger.

This lie is usually justified by pointing to Jesus’ example in getting angry and overturning the temple merchants’ tables. The problem with this argument that we have righteous anger is that it must only be about how God is being dishonored. If we are honest, we will admit that our anger is about us. We have been kept from getting something we want; we’ve been humbled; we are feeling guilty; we are afraid. James 1:20 says that our anger does not bring about the righteousness of God. Even if we did have righteous anger, God frankly doesn’t need it. He has done a very good job of handling people who dishonor Him from the beginning.

We sometimes mean by righteous anger that we are justified in being angry or that anyone would be angry under the circumstances. That belief doesn’t mesh well with Matthew 5:22: But I tell you that anyone who is angry with a brother or sister will be subject to judgment. Again, anyone who says to a brother or sister, ‘Raca,’ is answerable to the court. And anyone who says, ‘You fool!’ will be in danger of the fire of hell.”

Our anger is most likely not righteous anger.

#4 Anger is the only thing that works.

When I was practicing as a psychologist, I heard this a lot. I still do. The only way I can get my kids to obey me is to yell, to get angry. Reb Bradley who did an interview with me for the Homeschool Sanity show said in essence that if that’s the only way you can get your children to obey, it’s because that’s what you’ve trained them to do. Kids know they don’t have to listen to you because there will be no consequence UNTIL you blow your top.

A quiet voice can work to discipline your child. So can consequences, positive and negative. But you have to use them consistently. For most parents, anger seems easier. I will explain in an upcoming episode how to make discipline easier so you don’t have to get angry.

#5 Venting is a good thing.

When I first began practicing, I believed this lie. We worked with patients who suffered abuse. We encouraged them to vent their anger. We had them scream and rip up old phone books or punch pillows. There is some wisdom in asking patients to stop denying their feelings. But the research and experience tell me that venting is not effective long-term. Patients who had a great venting session weren’t any better in the days that followed. In the hospital, venting didn’t hurt anyone. But in our homes, venting can hurt the people we love. In our selfish desire to get everything off our chest, we may leave family members unable to get our hurtful words out of their heads.

Don’t think that venting to other people about your family members is the thing to do. Have you ever had the experience of retelling what your spouse or child did that made you mad and you find yourself getting angry all over again? Venting this way not only keeps you angry but can tarnish other’s view of your family members. There is absolutely a way to ask for prayer and advice without venting or dishonoring your family members.

There is also a way of expressing our needs and feelings in a positive way. I’ll share more about how to do that in part 2 on anger. But I’ll leave you with this Scripture that should have taught me venting isn’t a good thing. Proverbs 29:11 says, “A fool gives full vent to his anger, but a wise man keeps himself under control.”

One of my favorite resources for dealing with anger is Dr. Davis’s Freedom from the Spirit of Anger. In this video. Dr. Davis describes a father who only loses his temper every couple months. Dr. Davis said that for his family that was like living next to a volcano that only erupts every couple of months. Anger is a serious problem that can lead to divorce, emotional problems in children, and even death. Anger may increase the risk of heart attack.

Anger leads first and foremost to anger. Angry parents tend to have angry kids. Anger from one spouse leads to anger in the other. Proverbs 22:24 says, “With an angry man do not go.” Angry people are dangerous. Short of that, they’re no fun to be around. God takes anger very seriously. Psalm 37:8-9 says, “Refrain from anger and turn from wrath; do not fret—it leads only to evil. For those who are evil will be destroyed, but those who hope in the LORD will inherit the land.” Anger can lead to a multitude of evils. We want to overcome sinful anger through the power of the Holy Spirit.

One step to take now is to download a free printable of the truth about anger. You can meditate on these truths and accompanying Scripture each day to help you stop believing this lies about anger. This resource is made available free of charge to subscribers to Psychowith6. Click the image below to claim yours. 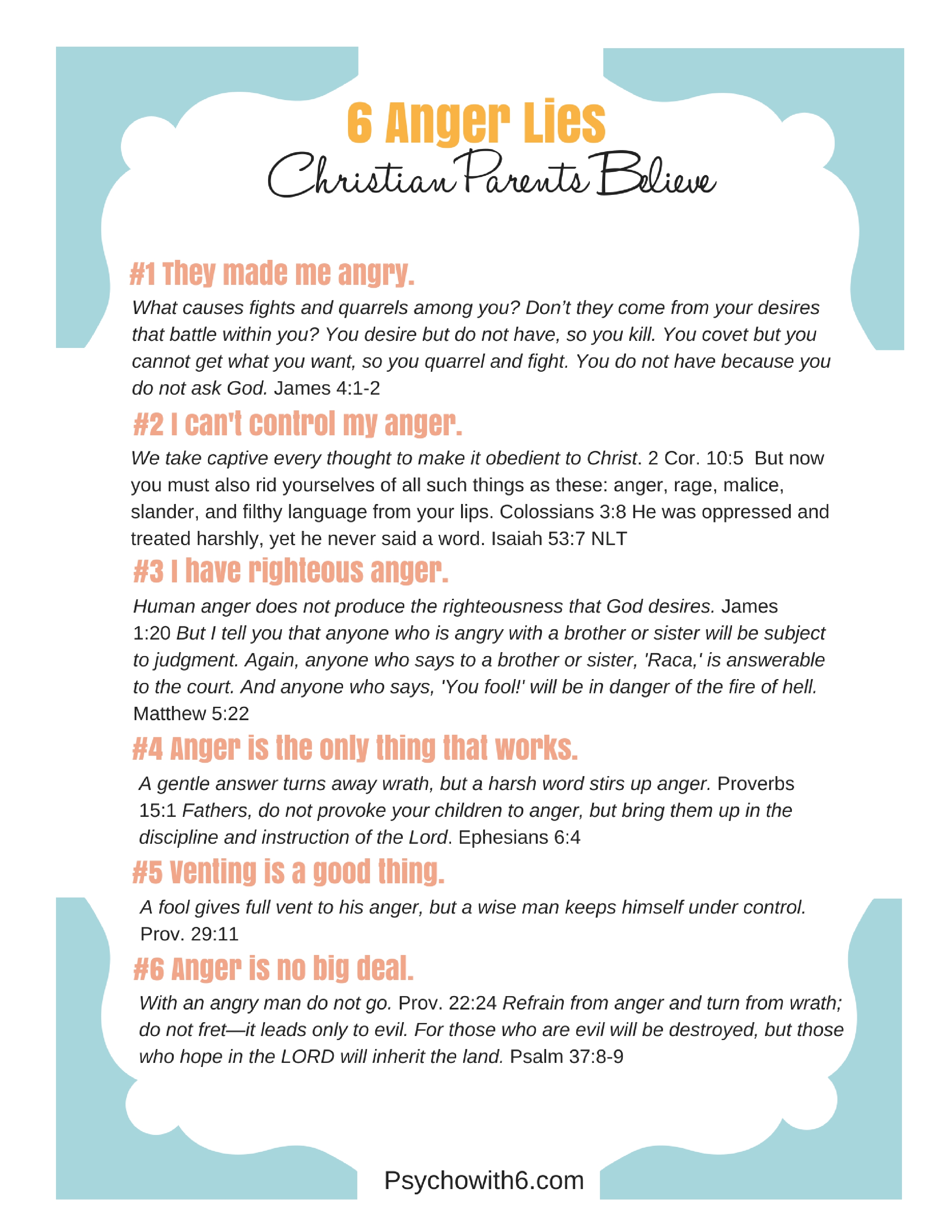 Which of these anger lies has been the biggest problem for you? Let’s chat about it on Facebook.