Who Says You’re Not Qualified to Homeschool? I had just met a woman in ministry when I told her that after I finished my Ph.D. in clinical psychology, I wanted to be a Christian psychologist.

“You can’t just be a Christian psychologist,” she said.

I tried to listen to what she said after that about qualifications and training, but I was stuck on that sentence. I was annoyed. How did she know? Why couldn’t I be a Christian psychologist if that’s what I wanted to do? What I felt called to do? At the same time, I was scared. When I entered graduate school, my classmates and I were stunned to learn all the requirements we had to fulfill in order to be practicing psychologists. Maybe this woman was right. I would have another whole list of requirements to meet to be a faith-based counselor.

When I finished my internship and graduated, I applied for a job with a Christian practice. I had to complete a questionnaire about my faith as part of my application. When I was interviewed, I worried that it would become apparent that I didn’t have the qualifications. I had earned my degree in a secular university. My father wasn’t a pastor. My family hadn’t even gone to church most of my life. Maybe he would say, “You can’t just be a Christian psychologist.”

To my surprise, he said nothing of the sort. I was hired and given my own office. Then I was scared again. I had never brought my faith into the counseling room. How would I do that? Fortunately, there were books on Christian counseling that I bought and read. I also had a Christian psychologist supervising me for my first year. But many times I found myself at a loss as to what to say or do with a client. I would say, “Let’s pray!” To my surprise, my clients were pleased with that idea.

Not Qualified to Be a Teacher

I was, in fact, able to just be a Christian psychologist. But that lesson didn’t stick with me. I struggled with it when I was hired to teach developmental psychology at the university. I had a Ph.D., but I had never taught students of any age before, let alone college students. I ordered the recommended textbook, did some of the things my professors had done to teach me, and came up with some of my own ideas. I had a good response from the students, ended up loving it, and my supervisor said he would be glad to hire me again. I quit teaching to have a baby, though, and faced a whole new round of qualification issues. I really didn’t think it was wise for the hospital to let me take the baby home. I hadn’t even done much babysitting!

I muddled my way through parenting the same way I had counseling and teaching. But when God called me to homeschool, I worried that I didn’t have the qualifications for that either. I had taught college students, but I had never taught anyone to read. What if I couldn’t do it? I had never taken an elementary education course. Once again, I managed to do it with reading and wisdom from others. I even began to feel qualified to teach my own children. In more than one discussion with people who asked about homeschooling, I was told that it was fine for me with a Ph.D. Other people, though, weren’t qualified to teach their children. I did what I could to educate them. “There are books, curricula, and support groups to help anyone homeschool,” I would say. And I believed it.

But when it came to me, I still believed that woman who said I couldn’t just be something. I had to be qualified. I had to be trained. 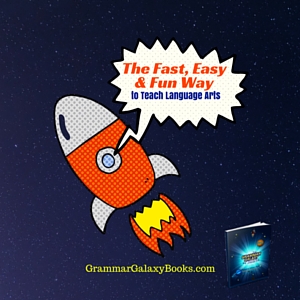 Not Qualified to Be a Homeschool Publisher

When I had the idea for writing my own language arts curriculum, I started off in the true spirit of homeschooling. I just jumped in and learned as I went along. I started writing the curriculum I’d always wanted to have for my kids. But as I came closer to finishing it, I got stuck. I made excuses. I quit working on it. I didn’t feel qualified.

I then had the opportunity to meet with a small group of homeschool publishers. I figured I could at least say that I was a blogger if I chickened out in admitting that I was writing curriculum. I met Charlene Notgrass, whose history curriculum I had used with my children. She was so warm that I decided to tell her what I was working on. I told her the concept behind it — that I would use story to teach language arts concepts and make them funny and memorable.

How foolish of me. I recently read the story of Orville and Wilbur Wright in another history curriculum my kids have enjoyed, Mystery of History. The Wright brothers were high school dropouts. Apparently, no one told them that they couldn’t just be engineers, or they couldn’t just be inventors. Because that’s exactly what they were.

The heart of homeschooling is that we can just be our children’s teacher.

Not only that, but our children can just be whatever God calls them to be. As the saying goes, “God doesn’t call the qualified. He qualifies the called.”

I shouldn’t have been surprised when Charlene’s face lit up when I told her about my curriculum. She got her husband’s and others’ attention and told them about it, too. That encouragement gave me the extra confidence I needed to finish Grammar Galaxy. Charlene found me at the homeschool conference where I exhibited it for the first time and hugged me. 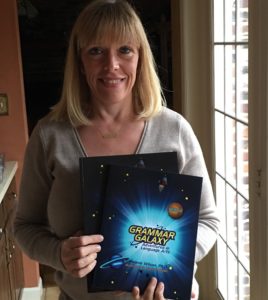 Taken the day the books arrived

That was just 21 months ago. Since that time, many moms who have used Grammar Galaxy with their kids have told me their kids beg to use it every day. They’ve told me it’s changed their homeschools because now their kids love to read. They tell me they are using it to learn grammar themselves because it was not their strong suit.

I now have three volumes of Grammar Galaxy published and a fourth in the works.

Has anyone told you you’re not qualified to homeschool or do something else you long to do? Let’s chat about it on Facebook.