How to Limit Your Child’s Screen Time 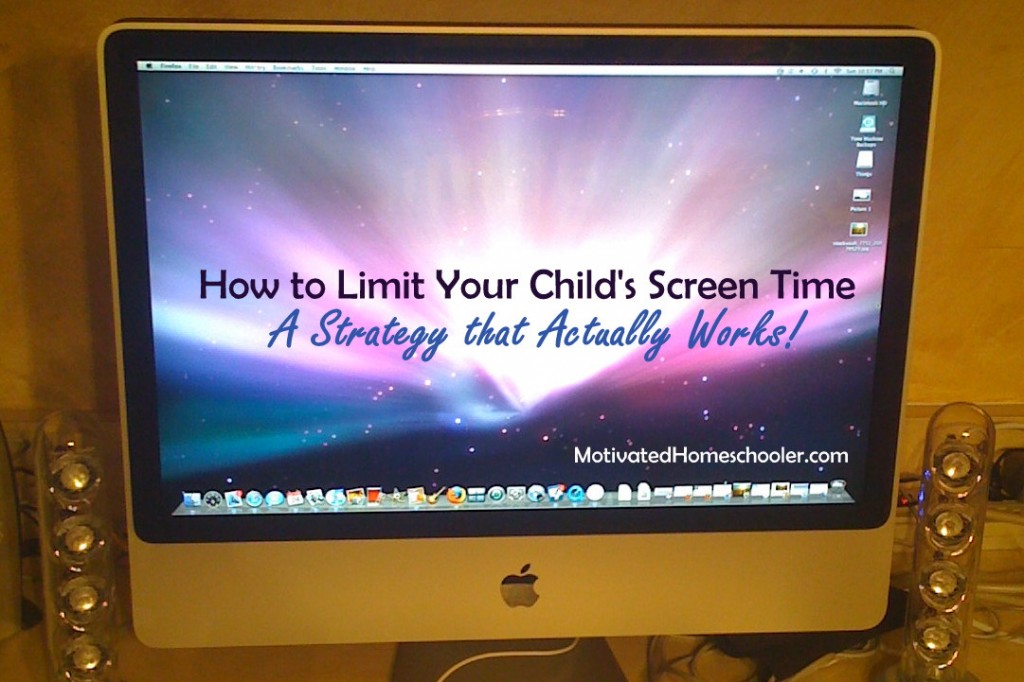 A decade ago, I was addicted to television. I didn’t watch it; my kids did. I used children’s programming and videos as a babysitter. Then I read The Plug-In Drug and was convicted that I needed to make a change. With minimal protest, I was able to limit my kids’ screen time.

When my boys were little, and given my experience with TV, I had no intention of ever getting a game system. I caved under the pressure of other parents, however, who told me I really should have one. It wasn’t long before video and computer games had become every bit the nanny that television had been. My husband and I put the games away and told the kids they could only play on their birthdays. Birthdays then became the obsession. I was asked every day how long it would be until the next birthday. It was as though the games had become even more desirable!

More boys joined our family and they developed more friendships with game-playing boys. When the Nintendo Wii became popular, my fitness-loving husband and I decided that an active game system was okay. Before long, however, non-fitness games were added to our collection as was another game system. The kids found free games on the Internet and began playing with their homeschool friends online.

My husband and I tried numerous approaches to containing the time. Kids were only allowed to play after school and before dinner. Often my husband proclaimed game-free weeks or simply insisted they stop playing to go outside. But the problem seemed more complex than our rules.

For instance, we noticed that the kids had very little interest in doing much of anything else but games. Board games and other toys stayed on the shelves. When shooed outside, they counted the minutes until they could come back inside. Creative play had diminished.

The other problem was enforcing limits. As soon as we would declare a gaming hiatus, a neighbor boy would come over with his new game and his puppy dog eyes. When time was up, there was just one more level to complete. Or worse, one or more of the kids would claim they hadn’t gotten to play “at all.” There would be tears and frustration all around.

Having read PlayStation Nation, I recognized these signs of gaming addiction and they worried me. I sat with one of my Homeschool Homies this summer to discuss the problem. As a mother of four boys, she shared my concern.

I began researching devices to control game time for both our families’ benefit. Before I determined that these devices would not work for our situation (we have too many devices, for one thing!), I was shocked by the behavior of children of reviewers of these products. Parents recounted that their kids had learned to drop the timer device to reset it. Others had disconnected or even cut the cables! You can read the reviews of two of these game timers here and here.

It doesn’t take a psychologist to realize that the kids tampering with video game timers have more troubles than just a gaming addiction. My friend and I agreed that our kids would obey whatever approach we used, but we had to determine what that would be. My friend had successfully limited gaming time to weekends in the past, but had found (as I did) that gaming became an obsession when it was allowed.

On the way home from my talk with my friend, I had yet another discussion about gaming with the kids. They already knew why my husband and I were concerned. We shared with them that gaming could become so addictive that young men would forego employment and even marriage because they would rather play. They knew how gaming could keep them from learning and building relationships with one another. I discussed the timing devices I had looked at with them and they agreed with me that they wouldn’t work.

After much discussion, the kids proposed the plan that we have been using and LOVING. Before I tell you what they came up with, let me tell you the results of limiting screen time in our home (I say screen time, because my daughter prefers to watch television):

Here is the kids’ taming screen time plan and why I think it works:

(when Mom and Dad have activities outside the home; everyone can play for an extended period and they look forward to a “free night.”

The kids put two circles representing two hours on our dry erase board in the kitchen. The circles are divided in halves, representing 30 minutes each. This is the part of the system I am most excited about. The kids have time to play during the week, but they are in control of it. When our children leave home, they will have to discipline themselves this way. This approach is the best training for adult life. The kids time themselves, mark the time themselves, and even police themselves. I’m still amazed.

Our oldest isn’t into gaming, so if three of the five of the kids want to use some of their time, they can play. They must also agree before starting who is going to play what and for how long. Otherwise, you end up with the, “I didn’t get to play” situation. The kids choose how to spend time, knowing they must be prepared for any guests during the week as well. Their typical approach lately is to play an hour on Tuesday and an hour on Saturday. Had I dictated to them when they could play, I doubt the plan would have worked as well.

Most of their game-playing friends have been told about the new system and some of them have adopted a similar approach, which is great! Because I can’t control what happens in others’ houses, however, I don’t try to control game time elsewhere. It’s not a significant problem currently.

I know families who allow gaming only in the winter, only ten minutes a day (which makes it not fun), and families who don’t allow games at all. As a family who has them, we are thrilled with this approach that allows our kids to develop self-control.

What, if any, approach do you use to control screen time in your home?