Why You Aren’t Following Through on Your Plans and Goals Are you great at making plans for the school year but you never seem to do what you’ve planned? Or are you great at setting goals for the new year that you struggle to achieve? If that’s you, I’m going to put my psychologist hat on and explain why your follow-through fails.

One of my friends mentioned that she is a great planner. She has a great time taking her goals and planning them out in her planner in detail. She is so excited about her plans. She tells her family and friends about them. She believes she will succeed. And then the plans she has spent time crafting, the plans she was positively giddy about, never get beyond her planner. Why is that, she asked me? Why do her plans so often remain in the planner where she put them and never become reality?

If you can relate to my friend, know that I can too. I’ve left so many plans and goals in the planner cemetery. I wanted to know why I did that and how I could carry out my plans and achieve my goals. So I started doing some research. Then I did some experimenting. I learned there are three reasons we fail to follow through with our plans and goals.

The first reason we fail to follow through was a surprise to me. Let’s say the new school year is upon you and you’re stressed. You don’t have anything ready. So you collect your books and grab your lesson planner and you start planning. Before long, you have several weeks planned. Ahh! Doesn’t that feel better?

Or let’s say that you haven’t been working out much this fall. As a result, your weight has increased. That makes you nervous because you have diabetes in your family. And you’re not that old. You know that if you don’t deal with eating and exercise now, you could have a serious problem later. So you talk with your husband about it and you agree that you’ll give one another the gift of a gym membership for Christmas. Yes! You ask for a new pair of running shoes too. Now you don’t need to worry about your health, right?

The problem is that sometimes when we make plans, set goals, or even take a small step toward achieving them, the anxiety that drove us to plan in the first place is greatly decreased. Research shows that in our minds, planning our goal is like actually achieving it. It’s handled, so we don’t need to think about it again.

When another homeschool commitment comes up that really needs to be arranged in your schedule, you don’t worry about it because you’ve already done some planning. But then things get real and your plan isn’t working. You stop using your lesson plans. Or it’s the holidays and you know you should work out and eat healthfully but you tell yourself that your gym membership in January will take care of it all.

Should we avoid planning to keep our anxiety high then? No, but there is a way we can stay motivated once we’ve planned. I’ll share that in next week’s post. In the meantime, I recommend reading How to Keep the Happy Planning Going.

Our subconscious is on to us

The second reason we fail to follow through with our plans is our subconscious knows the real reason we’ve made our plans and it’s not a good enough reason to do the work required.

So you planned lessons using two different science curriculum because you couldn’t decide which one to use AND you know that some of the best homeschoolers say that one curriculum isn’t enough. You really admire these homeschoolers whose kids got full-ride scholarships. You also scheduled one read aloud a week regardless of how long they are, simply because you want to read a lot of great books this year–like the ones you meant to read last year.

But your subconscious is thinking, “Really? Like that’s going to happen.” We can ignore our subconscious for a while, but as soon as we get through a week or two of school and get nowhere near everything done, our subconscious behaves like a homeschool hater. “You may as will give this up,” she mocks. And so we do, even though we don’t acknowledge that we aren’t being realistic in trying to be awesome homeschoolers. By the time we acknowledge that we aren’t following through with our plans, we’re more likely to tell ourselves that we’re losers than see that no homeschooler could do everything we planned.

When it comes to fitness, if one of the real reasons you wanted to set a fitness goal is because you know you’re going to see your super fit relative over the holidays, you aren’t likely to follow through. You’ll see her and say, “Yeah, so we got ourselves a gym membership for Christmas.” She’ll be enthusiastic. “That’s great! Good for you,” she’ll say. And you’ve accomplished your goal as far as your subconscious is concerned. No need to sweat it until next year when you see her. You can join a different gym then.

If you aren’t following through, there’s a good chance your “why” for your plans or goals is weak. Next time I’ll share strategies for keeping a strong why.

You don’t know how you work best

The third reason you aren’t following through is you don’t know how you work best. Some of the homeschool bloggers you follow have their kids start school by 7 a.m. It works for them, so you’ve been trying that. But you’re a family of night owls. Every time you try to get the kids up in the morning, it’s a battle. They’re tired and you’re cranky. Once you start, the kids sit and stare into space, falling asleep during your great read aloud. You’ve tried letting them get up much later, but that doesn’t really seem to work either. You have no idea how to get it all done without being mad at your kids and yourself.

And that’s just the beginning. You don’t know if you should be a year-round homeschooler, a textbook homeschooler, or a co-op homeschooler. Do you have time to work, blog, or start a business too? It sure doesn’t seem like it, though your finances could certainly benefit from the extra income.

Your super fit relative gets up early to work out. It gives her energy, she says. But you are so exhausted from staying up late and exercising early that you just want to crawl into bed and skip school. You’re just not the exercising type, you decide, and the fitness goal is forgotten.

You don’t know how you work best because you’ve been trying to make what other people do fit you. I did this for years in my homeschooling. I wondered what was wrong with me and my kids.

I also did it in my efforts to blog and write books. I thought I was a loser who wasn’t cut out for writing because I couldn’t make other people’s approaches work for me. And then I tried something new. Instead of continuing to force myself to use other people’s methods, I started experimenting. In 2013, I tried a new method to help me follow through and be productive every week. In the process, I  found some things that worked brilliantly and discovered others that people raved about that didn’t work well for me at all.

At the end of that year, I felt like I understood better how I worked best. I planned to write a book about my experiments and share the secret to getting more done. But months went by. And then years. And I still hadn’t written the book. During that time, however, I learned more about how I can get more done. In fact, I started becoming more productive than I’ve ever been. In fact, in addition to homeschooling and podcasting, I published The Organized Homeschool Life book and planner and three volumes of Grammar Galaxy language arts curriculum. I began speaking at homeschool conferences and running a business while still having time for my family and several hobbies.

At the beginning of my year of experimentation, I thought I would be telling people the best strategies for getting more done and following through with their plans. But five years after finishing the experiments, I understood that the most powerful strategy is to learn how you work best. I finally felt ready to write a book about others could discover their unique productivity formula like I did. It’s going to be available to you next week when we talk about how you can get more done in 2019. 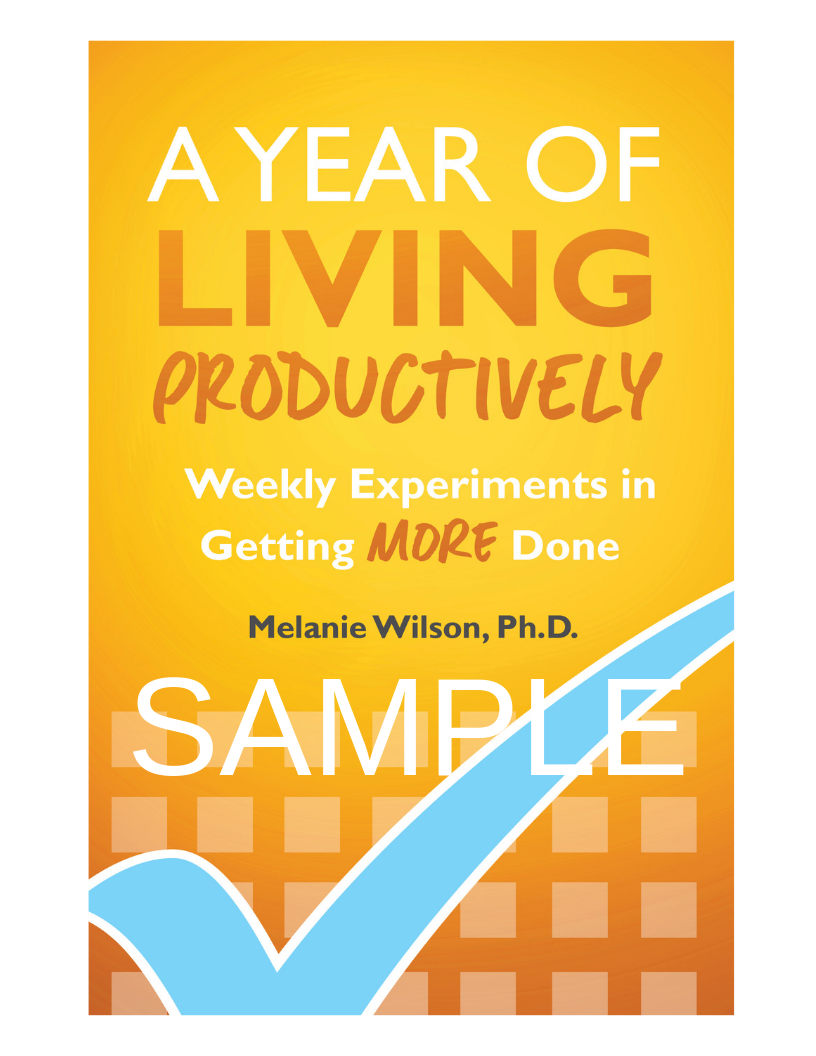 But if you can’t wait until then to develop your own method of following through, you can download a free sample of the book, A Year of Living Productively, that will get you started. Click the book cover above for your free sample and productivity updates.

Next time I’ll explain how I overcome these three obstacles to follow-through to be the most productive (and happy) I’ve ever been. Talk to you then.