Can Steve Kamb’s Do it Now Help You Get More Done? This is Week 35 of a Year of Living Productively

I tested whether Steve Kamb’s Do it Now approach could help me get more done. As you might surmise, any routine task that occurred to me to do, I did immediately, as much as I was able. I did not do tasks outside of their assigned time. Scroll down to last week’s post for details.

How Do it Now Saved My Sanity This Week

How Do it Now Made Me Crazy This Week

Did Do it Now Help Me Get Things Done?

Yes, but I have work to do. If I change this very bad habit of mine, I think the potential for increased productivity is greater than with any other hack I’ve tested. The question is, can I change it?

I think I’ve gotten better with this, but I could benefit from watching the Do It Now video regularly. It’s definitely a very effective approach for many regular tasks. 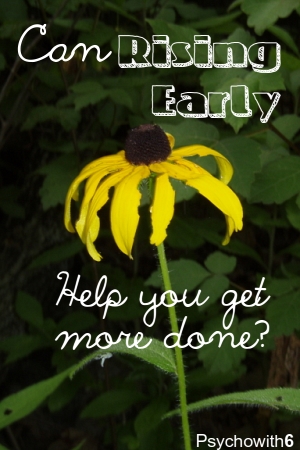 The Productivity Approach I’ll Be Using for Week 36

This week I’ll be testing Steven Aitchison’s Early Riser Approach. Rather than rising at my typical 6 a.m. or later (my schedule hasn’t been as routine lately), I will wake up at 5 a.m. so I can add an hour’s work in the morning. I will attempt to get the same 7 hours’ worth of sleep by going to bed an hour earlier.

The concept. Steven claims 5 benefits of rising early which include productivity and time to work on life goals. I am wanting to complete a first volume in a new curriculum I’m writing and rising earlier is one approach I’ve considered toward achieving this challenging goal. The advantages of working at this time are no distractions. No one else will be up! The potential disadvantage is that I will not be on the same schedule as my husband. He has said he is game for me to give it a week’s test. We’ll see if he helps or hinders me. 😉

Steven gets just five hours of sleep a night and argues that we can train our bodies to require less sleep. I agree to some extent. I used to require 8 hours nightly and have trained myself to do well on 7. Maybe it’s what Steven would call “lack of training” that contributes to my belief that I need all 7 of those hours, but regardless, I plan to keep them.

Steven emphasizes the importance of gradually making the change to rising earlier (and/or requiring less sleep) and I agree. I get up at 5:45 fairly often, so I don’t think it will be a huge shock to get up at 5, but time will tell.

If you’d like to join me this week, here’s what you do. Read the 5 benefits of rising early, decide on what time you’d like to get up (and how to stay up!), and whether you’ll break it in slowly or not. Make sure you’re motivated by knowing exactly how you’ll use the extra time.

To see if rising early helped me get more done, click here.